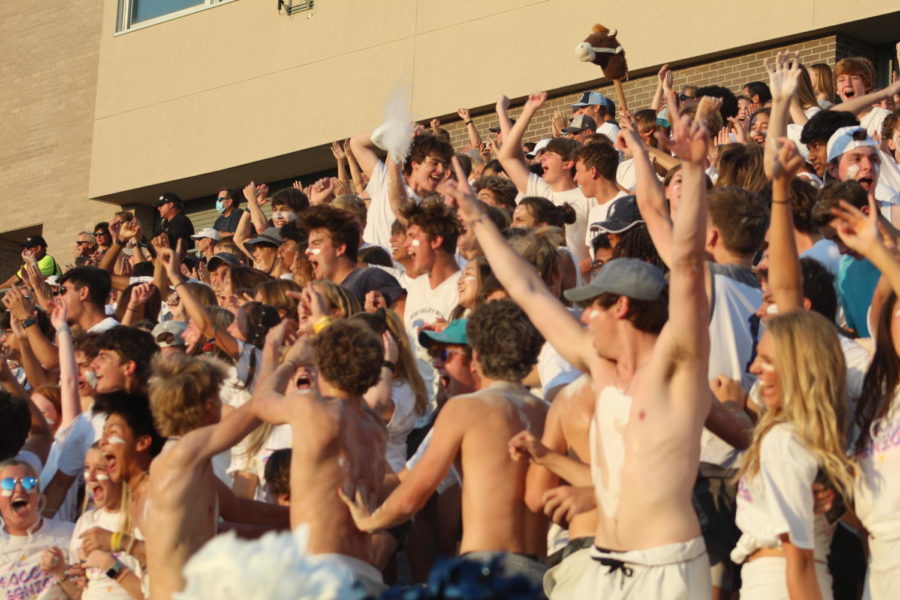 Fans cheering after a scored goal

The Blue Valley North boys varsity soccer team defeated Blue Valley Northwest with a score of  3-2 on Aug. 27. This is the first game that students have been able to attend since the start of the COVID-19 pandemic.

In comparison to last year, some students missed being able to attend games which created a large turnout in the student section for the game.

“We use the roller coaster at the beginning of every game,” Chong said, “It’s tradition.”

The Mustangs got going early, scoring first in the 36th minute of the first half, now leading 1-0.

The BVN student section continued to fill the field with cheers throughout the game, jeering at BVNW’s soccer team and having spirit competitions with the opposing team’s student section.

As the sunset fell, the Mustangs still went on, taking a 3-1 lead in the 29th minute of the 2nd half.

“When we went up 3 to 1 that’s when I really felt like we took hold of the game.” senior captain Jonny Emerson said.

As the final whistle blew, the Mustangs defeated the Huskies 3-2.

Students returned to the stands for the first time in nearly a year and a half, and that made a difference for players and students alike.

“I can really feel the energy when we have fans and it really gives me a rush of adrenaline,” Emerson said.