A Senior’s Guide to Getting Rejected from College 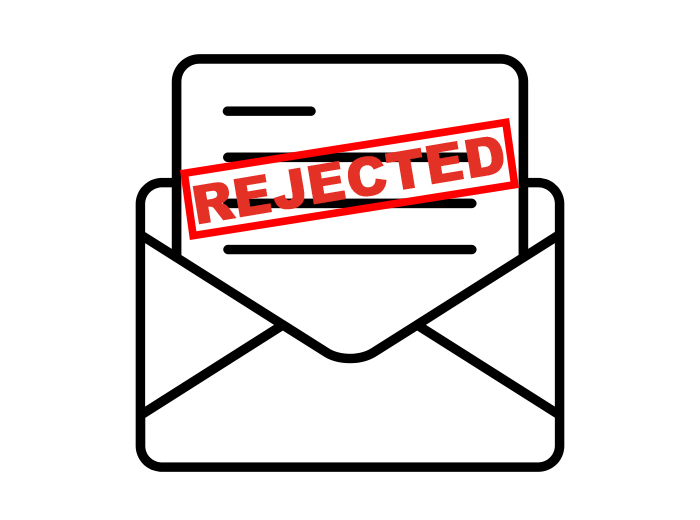 Letter graphic by artworkbean from the Noun Project. Graphic edited by Alice Wu

Not participating in enough activities

Many colleges are going to ask for resumés, so you’d better pad yours up. Make sure to join all the honor societies you can. Join STUCO. Run for class officer. Show up to a couple of the DECA and FBLA meetings and maybe go to nationals without any preparation. Later, you’ll have tons of shiny accolades to regurgitate into all your essays. You won’t struggle to fill up the minimum word count, so you won’t have to include all that meaningless fluff about passion and growth. You’ll be very well-rounded, for sure, and thus extraordinary. Or is it extra-ordinary?

If you’re not stressed and sleep-deprived, you’re not working hard enough. Who cares about pursuing any of your passions in high school? Who cares if you actually enjoy any of your classes? Double up on science whether or not yet want to pursue STEM. Make sure to load up on all the AP classes you can, from AP Human Geography to AP Microeconomics. Also, make sure to take AP Government online because you’ll earn an easy A that way.

Not having high enough test scores

Everyone knows that if you’re shooting for schools like Harvard, you need to find a way to stand out, and what better way to do that than through your test scores? Obviously, a 35 or lower on the ACT just won’t cut it. Make sure to save up thousands of dollars for a tutor because that’s the only way to succeed. Forget about having a social life. Spend hours studying every week. Sure, test scores say nothing about your character or your work ethic. Sure, almost 3,000 people get 36’s nationwide each year. But hey, you’ll be one of them.

Forgetting to mention your most important awards

On the Coalition and Common Applications, you’ll be told to list your five most important awards. If you followed my advice in the previous tips, you would have plenty to use already. As a National Merit Semifinalist and National AP Scholar, you’ll certainly stand out among the tens of thousands of other students who also thought their test scores were good enough for top colleges. You may realize that there’s already a testing section on college applications where colleges will be able to see your AP scores, but honestly? Colleges are academic institutions, and it won’t hurt to make it very obvious to them that you’re dedicated to your schooling and not much else. I mean, if you have to spend all your time studying in high school, you’ll only have to suffer a tiny bit more in college when your workload is even heavier. You’ll already have experience shedding angry tears at 3 AM in the morning.

Not having enough people edit your essay

Don’t believe all that garbage about conveying your own “voice” in your college essays. Admissions officers read thousands of essays year, and even if your personality hasn’t been quashed by all the counselors, parents, teachers, and stressed-out peers who tried to give you advice all throughout high school, admissions officers would immediately forget your voice upon reading it. Honestly, you need all the help you can get, and if others want to write your essays for you, so be it. If you can throw in some sob story about death, drugs, or divorce, or even better, all three, then you’re a shoo-in. If it’s actually true, then great! If not, well, no one’s going to know.

Failing to research “fit” for your colleges

Why would these admissions officers ask so many questions like “Why our school?” Let’s be honest, every student out there is just after the prestige. We all want to end up at a school that’s as high up on the U.S. News best college rankings as possible. Admissions officers know this, and they’re just trying to weed out the students who procrastinate too much to finish answering all the college-specific questions. Apply to as many schools as you can, more than 20 even, if you can manage it.

Just don’t write in your Princeton essay that you love their International Business major. They don’t have one. And don’t be afraid to copy paste your responses for other schools to save time. Remember to tweak your essay accordingly. Don’t forget to edit the part where you say you want to wear Yale’s blue sweatshirt. Heads up: Princetonians wear orange. Show even an ounce of intelligence, and that’s all colleges want with their “Why This School?” essays. I mean, it’s not as if there are other factors besides prestige in the college decision process. Right?

Let’s continue to assume that you want to go to Harvard. Don’t forget to head over to Naviance and compare your GPA and test scores to past accepted students. Your resulting feelings of incompetence will ensure you take this whole process seriously enough. Still not fazed? Check out College Confidential and read some “What Are My Chances?” forums! Eh, so there are some liars, but that can’t be avoided. Oh, some kid in Colorado has a 1600 on the SAT and won nationals in fencing? Oh no, they got rejected?

Welp, there go your chances, I guess. You can’t compare with that. But you know what, it’s not as if you were ever going to get in anyway.

I mean, it’s not as if high school is about more than just preparing for your future. It’s not as if your life has already started and living in the moment is important too. Turns out you just blew everything, and it’s time to go cry alone in the bathroom.

The views and opinions expressed in this article do not necessarily reflect the position of the North Star staff as a whole or even the author’s.