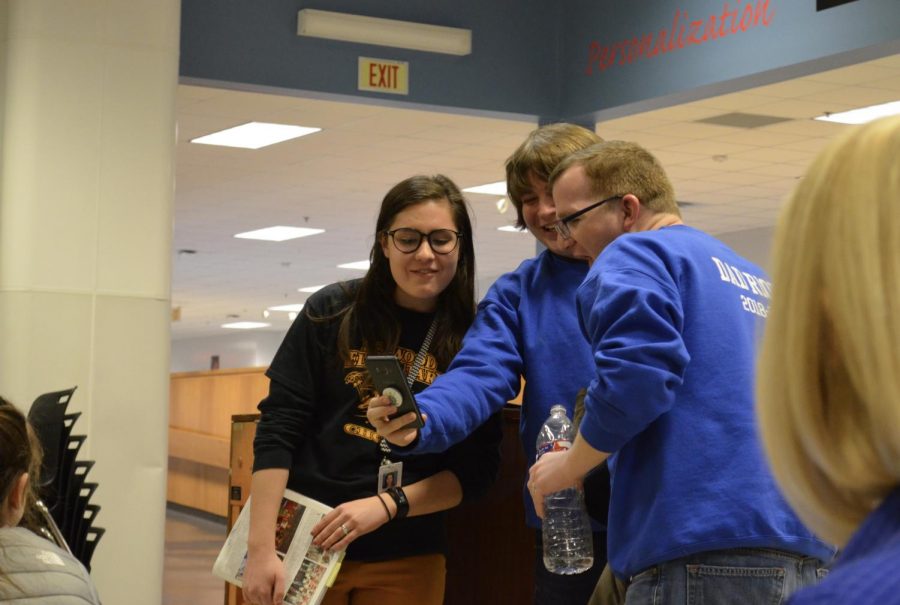 As enrollment rolls around and eyes turn towards the next school year, the BVN chamber singers took a trip to Leawood Middle School to join hands in song with students of all ages. From fifth graders to seniors in high school, the LMS Choir Festival included a variety of performances to showcase student evolution throughout years of choral success.

Every student in music has a beginning. Every child can remember the first time they picked up a bow, pressed a key on a piano, or sung their first song. The memory of wide eyed curiosity towards a wall of complex sound radiates in the mind of many chamber singers. A time in which two parts sang in simple harmony. With chairs too big and dangling feet, the chamber’s annual visit serves as an inspiration to many inspiring musicians seated in the audience. Junior, McKenna Louis, can remember sitting in the very same seats looking towards a future of music and song.

“I remember when the Chamber singers came to OTMS when I was in eighth grade and it inspired me so much to continue in choir,” Lewis said. “Between their professionalism and Mr. Sickel’s directing, I was in awe of the group and I knew that I wanted to be involved in choir in high school and hopefully become a Chamber member.”

Beginning with warmups, conductor Jason Sickel illustrated the very essence of his class for incoming freshman students preparing to enroll in the approaching year. Running voices from high to low, switching vowels to and fro, tricky clapping, and complex rhythms, the chamber singers’ simple warm ups provide an abundance of insight into the coming years. In preparation, Sickel invited the eighth graders to join in on the warm up. Anxious and excited to meet the new recruits, Sickel took the time to individually shake each eighth graders’ outstretched hand.

Forming ties with incoming freshman wasn’t the only goal of the event. Groups of fifth graders from Leawood and Mission Trail Elementary schools also took the opportunity to learn from BVN’s performance. As the concert began, many fifth graders turned and began to converse with the older students, asking them questions about high school, activities, and cafeteria lunches.

“When I was talking to the fifth graders from Leawood Elementary School, they asked about what high school was like,” Lewis said. “It’s crazy that I was that young not that long ago and only saw high school in the movies. Now I’m in high school and kids in elementary school [still] think it’s so far away. I really tried to help them stay in choir and continue through school because it has helped me get through so much.”

Along with the older BVN high schoolers, several eighth graders embraced the spotlight by taking their turn helping the groups unwind in physical warm ups that consisted of hand shaking and thumping feet.

The concert opened with LES fourth and fifth graders singing two songs in harmony. The two parts allowed for simple melody, but also introduced an opportunity for the young students to play a role in their second piece. The song, “Ugly Sweater”, introduced a comically heated conflict regarding a specific sweater, which concluded with a compromise of exchanged smiles.

The performance continued with two pieces sang by the MTE fifth grade choir who introduced by big volume. The young musicians opened with fast rhythms and melodies before continuing into a slower ballad. Their small lungs produced big sound, impressing the audience members, including the BVN chamber singers.

After singing their first piece, “Fuego,” excitement flourished among BVN’s singers with the eighth graders performance of “White Winter Hymnal,” which was made popular by Pentatonix. The song proves close to the group’s heart, being performed several years earlier in a competition to open a concert for Pentatonix. Their songs showed great promise and excitement for the future of the program.

The chambers performance provided an insight into the years of hard work and leadership from their teachers. BVN’s “Salutation” demonstrated soaring notes and deep, rolling basses, while “The Circle of Life” mixed rhythms with descending and ascending notes before moving to a legato melody continuously building between each individual part.

The festival’s connection between people and schools feeding into North took its symbolic purpose into fruition. All choirs, both young and old, circled around the empty chairs of the LMS commons to sing “Why We Sing” together in harmony. With lyrics of connection, the song and continuous circle demonstrated the very essence of music with its ability to “build a bridge, break down a wall.” Junior, Declan Carter, believes that music serves as the basis for communication regardless of age, race, language or social differences.

“I feel that music is universal. It’s easily one of the purist mediums of connection and it’s the embodiment of the human experience,” Carter said. “We can sing in foreign languages or nonsense words and it has the a power that simply speaking those lyrics could never embody.”

The songs and experience returning to LMS allowed the BVN musical community to form connections with students across the district with eager eyes looking towards high school in the future. Anxious fifth graders were able to ask questions about middle school, while eighth graders questioned high schoolers. Whether electing for questions regarding choir or classes, connection among students was brought closer by the very presence of music, along with school lunches.

“I’ve found myself closest to those around me in that moment of vulnerability when I’m singing with my fellow Chamber members,” Carter said. “The one thing I want these kids to get out of our performance is to see how close we are. We are really a family, and I want them to be a part of that one day.”