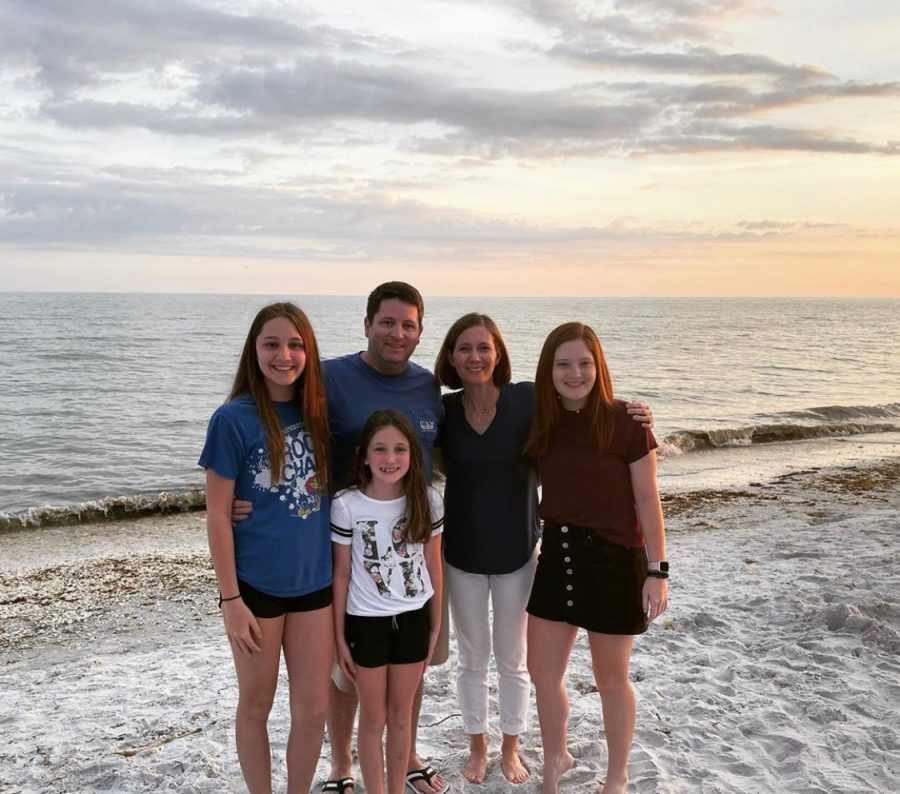 Junior Emily Bechard and her family on vacation during Spring Break, before the lockdown order began.

Whether part of Gen-Z, Millennials or Baby Boomers, the COVID-19 pandemic has had some degree of effect on almost everyone in the US. In Kansas, the recent lockdown required everyone to stay at home except for essential activities. However, while the situation has caused some to take extra precautions, others have taken the situation more lightly.

Junior Emily Bechard is quarantined with her two younger sisters, Molly Bechard, 14, and Annie Bechard, 9. All three of them said they didn’t realize the seriousness of the virus when it first started.

However, since the virus can affect older people more severely, for the Bechards and other students, getting sick is not a major worry.

“I think I’ll be fine,” Molly Bechard said. “I think we’re being pretty safe. I mean, it’s not like I go to hang out with friends. Like, yeah, I’ll go to the grocery store, but I come home and I wash my hands.”

With the lockdown order, the Bechards have been finding ways to cope while staying inside through activities such as reading, watching TV and watching and making TikTok videos.

“I think most people are turning to comedy because, first of all, they need something to do out of boredom,” Emily Bechard said. “And we all need something happy because right now it’s really dark and gloomy.”
Throughout the lockdown the Bechards have been keeping in close contact with their grandparents. Molly Bechard said her grandmother’s reaction to the pandemic was much more extreme than hers and her sisters’.

“[My grandma] told us a story while we were over there,” Molly Bechard said. “She had found this solution to clean her stuff, and it was a vinegar solution. And she cleaned every single one of her grapes, like every individual grape with this vinegar solution to make sure that they were okay.”

Emily Bechard described her grandmother as “one of the overreactors” during this time; however, many others have been taking similar precautions as well.

Freshman Shrey Chaturvedi is quarantined with his sister, Aakriti Chatervedi, 18, as well as his parents, Madhulika and Gaurav Chaturvedi. The whole family has taken multiple measures to remain as safe as possible during the pandemic.

“[We wear] face masks if we go out, we spray ourselves [with ethanol],” Shrey Chaturvedi said. “We have to wash our hands… and no shoes inside the house. You have to leave it in the garage or outside.”

Although some of their friends and peers have been staying home as well, both Shrey and Aakriti Chaturvedi said it has been frustrating for them to see others continue to go out and have fun.

“If everyone else is taking precautions, limiting their social life, trying to find things to do at home and increasing their happiness at home, I don’t understand why some people have to do that while others are enjoying themselves,” Aakriti Chaturvedi said. “Because I feel like their recklessness reflects on us as a society.”

Aakriti Chaturvedi said that because she and her brother have been strongly influenced by their parents, they have both gained more serious attitudes toward the pandemic. Their mother, Madhulika Sharma, is a scientist and their father, Gaurav Chaturvedi, is a physician.

Being a physician, Gaurav Chaturvedi is often exposed to those affected by COVID-19.

“It’s heightened [my] sense of anxiety,” Gaurav Chaturvedi said. “I feel anxious at times. I don’t know what day I will contract the virus, or [if I] have already… And I’m worried about exposing my family.”

Because his work entails being exposed to the virus, the whole family has taken extra precautions by changing clothes when going out, thoroughly washing food, wiping down grocery bags, etc. In addition to these current lifestyle changes, Madhulika Sharma also expressed concern over the long-term effects the pandemic will have on the economy.

“Right now the jobs are okay for me and for Gaurav also, but I think overall the economy is going to be very bad,” Madhulika Sharma said. “For people like me who are scientists, I think, other than [for] the coronavirus itself, funding will really decrease for other scientists. And so that’s gonna be a big major deal in the coming years. I think it will have a major impact on our lives in the long run.”

As the death rates in the US continue to increase, both Madhulika Sharma and Gaurav Chaturvedi agreed that people need to start understanding the seriousness of the situation.

“It’s a real threat and it’s an infectious disease,” Gaurav Chaturvedi said. “And it’s not time to be superstitious or believing in conspiracy theories. Be realistic about the problem and get together to solve it rather than fighting each other.”