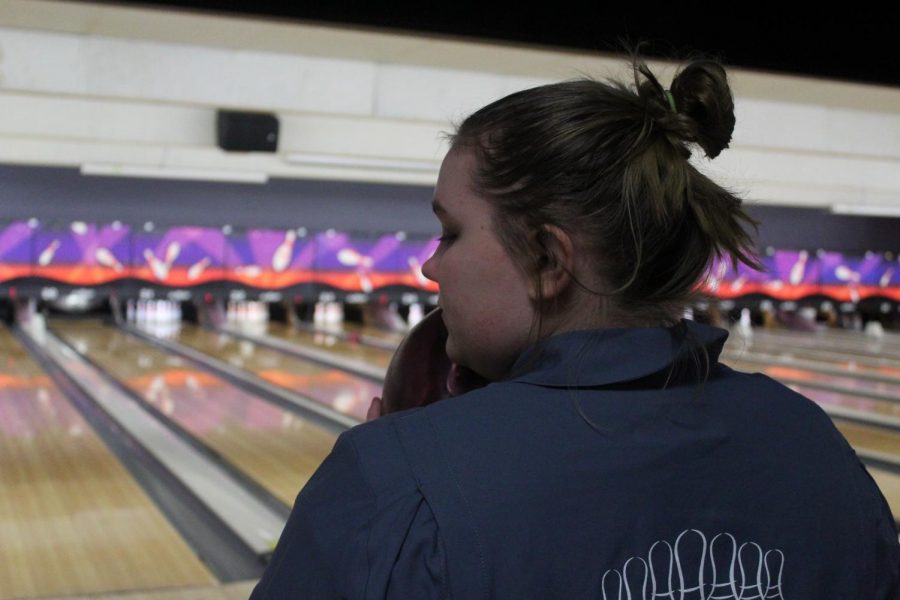 Pins rattle after toppling over as the varsity bowling team tries to bowl their way to regionals. The team is a full lineup of bowlers this year, unlike previous years. They hope this will help them get to regionals. Coach Erin Nathan recounts the changes in team size within the last two years.

As the team has gotten bigger, so has the competition. With five other high school bowling teams in the region, ensuring there are enough lanes for each team’s practices can be a challenge. This can create a sparse practice schedule, according to Nathan.

“There are six high schools that all bowl at Olathe East lanes and so we’re one of those teams, so they have to break it up so we all have enough practice lanes,” Nathan said. “So, we don’t get to go every single day. We usually get at least one to two practices a day of a week. And then, we have two meets a week, typically.”

Throughout the season, the girls bowl in ten meets. After finishing this series of meets, a handful of team members are selected to move on to the regional competition. As of January 29, 2019, the team has bowled five games, finishing the first half of the season and moving on to the second.

This meet marked meet five of senior Hailey Goodrich’s high school bowling career. Before joining the team, Goodrich was under the impression that the bowling team was a club and not a legitimate team. Since having joined, Goodrich has found companionship and a good time.

“This is my first year and I didn’t even know it was an actual team, I thought it was a club,” Goodrich said. “So, that opened my eyes. Obviously, I met a bunch of new people so yeah, that’s been fun.”

Much like Goodrich, sophomore Tristan Cummings has made friends on North’s team as well as other schools’ teams. While making friends, Cummings has been able to bowl her way to a spot on the varsity team. The January 29th game signified her first varsity meet, resulting in varied emotions.

“I’m actually pretty nervous,” Cummings said. “This is my first game bowling varsity. But, I’m also really excited. There’s a couple of girls that I’ve met from my previous meets and I made a whole bunch of friends. So, I’m excited but, still nervous.”

While making friends on other teams during practices and previous meets, Cummings has picked up on the level of competition that is presented by those she bowls with. Teams such as St. Thomas Aquinas, Bishop Miege and Blue Valley Wests’ hightened competitivity increased the stakes of meet five of the 2019 season, according to Cummings.

“We’re playing much harder teams, they have better teams like Aquinas and Miege, which have really good teams and they put a lot of effort into them and since they are boys and girls teams,” Cummings said. “We’re only playing one other Blue Valley school, so that’s kind of like a bigger deal since it’s not just other schools that are here.”