It only leads to treble 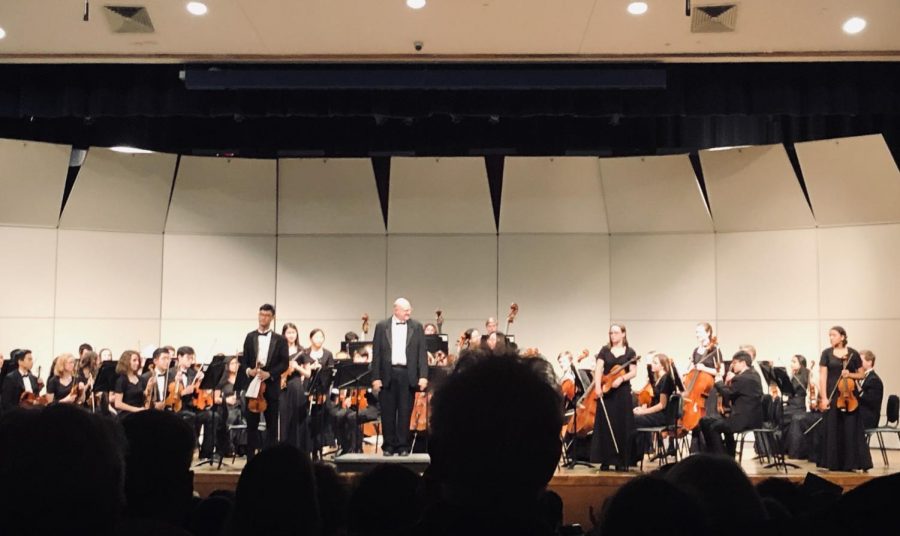 Mr. Phalp directs the orchestra at the Dec. 13 concert.

With the crescendo of building strings, overlapping melodies and added harmonies, the music from the orchestra concert on Dec. 13 left many enveloped in the spirit of the holidays. From sixth to twelfth grade, the performance offered a chance to see the orchestras’ development throughout the years.

Beginning with six grade, students from Leawood and Overland Trail Middle played two pieces of great fun. Their second piece, “Hot Potato” by Doug Spata, took a simple melody and passed it among sections. The building of plucked, staccato notes to the legato strokes of their bows, demonstrated a great development of skills from just the beginning of the year.

After the sixth grade performance, the concert continued with the remaining middle school students. The seventh graders’ two performances used more complex melodies and added harmonies. Their performance was conducted by Lauren Betts, who then moved to instruct the eighth graders during their two songs. These students, preparing to enter high school in their following years, played pieces evidently demonstrating a development of more complex music. Their great improvement was noticed by many. Betts commented that she was “amazed at the musicality” of her students. Their final piece concluded the middle schools portion of the concert in a rather complex piece with major to minor shifts, a traveling melody and building bass and alto treble lines.

Students enjoyed seeing the progress from middle school into high school, according to violist Laney Pennington. Even the building of more complex melodies demonstrated great improvement in skill and dedication.

“Just watching all those kids who are going to be moving through all these different grade [levels],” Pennington said. “That’s the way we keep growing and getting better, and I probably yelled a lot because I support those kids so much.”

The high school performances offered holiday fun. The concert orchestra, playing three pieces, opened their portion with “Allegro” arranged by Bryan Folus, while their second piece was an iconic rendition of “Les Toreadors” arranged by Todd Parrish from Carmen Suite. With its popularied melody, the song offered precise, rhythmic accuracy along with its familiarity. The concert orchestra’s most exciting piece, however, was the holiday song “Let it snow! Let it snow! Let it snow!” arranged by Robert Longfield. Sung through string, this holiday classic offered a playful melody from the interaction among the stroke of their bows and the staccato plucks from the students’ fingers.

The final leg of the concert was closed by the symphonic orchestra that included sophomores, juniors and seniors. Their first piece, “Iphigenia in Aulis” arranged by Kirk Moss, built a wall of sound with developing crescendo from the violin section until the orchestra swelled in sound, engulfing the theater in its vibrations.

The second piece was a makeup of five separate movements. Students were given the opportunity to show off their skills in a variety of small groups and solos. Senior violinist and orchestra president William Wei played two solos during the arrangement, impressing fellow students and parents with his musicality. Paralleled with an impressive small group ensemble, the song was able to build in both individual and group expression. Soloists and ensemble members included William Wei, Yujin Hahn, Sooim Kang, Jin Dawson, Cassi Porter, Laney Pennington, and Gloria Park.

“It was my first time getting a solo . . . and I had played [that piece] before and I just love [it],” Pennington said. “Immediately after the end of the solo all of my limbs were numb because I hadn’t remembered to breathe . . . [but] it felt good to get recognized.”

Even though many road bumps were hit, from minor technical difficulties to a rushed tempo, the symphonic orchestra concluded the concert in a joyous arrangement of two movements from The Nutcracker. With music from one of the most iconic christmas scenes, the audience enjoyed the building melody and descending notes passed from section to section. Though the last movement, “Russian Dance”, was rushed, it was still a big hit with audience members, according to violinist Lasya Kambhampati.

“The last piece of The Nutcracker was definitely rushed . . . [but] it sounded really good, mostly because it’s recognizable,” Kambhampati said. “ [And] the audience didn’t notice because it [sounded] good, but we’re looking for perfection.”

Though the concert wasn’t perfect, many enjoyed being able to see the progress of the students around them and, even so, the December concert spread holiday spirit, family unity and community support.