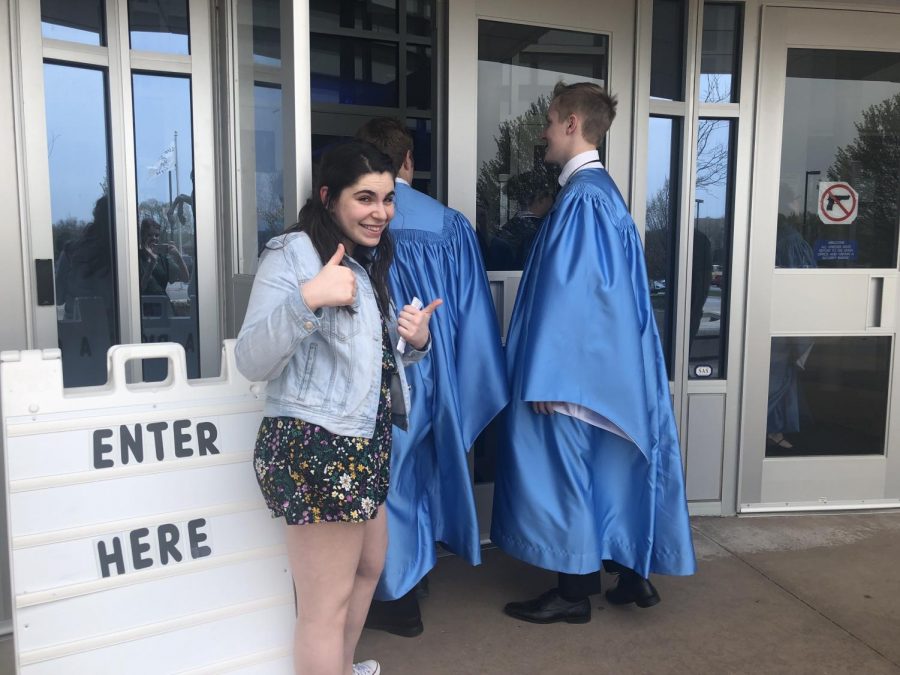 Throughout the year, BVN’s schedule has been speckled with concerts and performances from choir, orchestra and band. The swelling music that has filled BVN’s Performing Arts Center has demonstrated progress and hard work throughout the year. With increasing musical difficulty, the KSHSAA State Large Group Musical Festival presents a bigger stage for students to showcase their work.

Music state large group contest is a Kansas State High School Activities Association, KSHSAA, sponsored event. KSHSAA’s mission is to “serve students by providing leadership for the administration of education based interscholastic activities,” according to kshsaa.org. Their mission statement claims they’re a student-centered organization and a recognized state authority on such activities. In regards to music, KSHSAA sponsors a variety of events, but some of the most notable include solo/small ensemble, at both the regional and state level, and large group contest.

On Apr. 6, select students participated in regional solo and small ensemble competitions held throughout the area. Individuals to receive a one from their judge will get a chance to showcase their talents at state. From students participating in band, orchestra and choir, individuals prepared their pieces with the help from a variety of people in the community: private teachers, accompanists and conductors. Within the choral community, Jason Sickel offered students an opportunity regardless of private lessons. He offered help to students who required it by picking music, running through their pieces during North Time, offering advice and providing access to the choirs’ accompanist, Lori Levens. Students regardless of age were able to participate as soloists or small ensemble members, which were also welcomed onto the regional stage.

Junior Mckenna Lewis was one of many students who participated at regional contest. She performed with both the BVN Chamber’s Women Ensemble and Chamber Singers.

On Apr. 10, however, both BVN’s Mustang voices, orchestra and band were able to take part in large group contest. Both concert and symphonic orchestra took a bus over to a different school in the Overland Park area and performed for three judges. Both concert and symphonic orchestra got a chance to play for the judges. Symphonic’s pieces included the second and third movements of “Three Binghams” and “Incantations” and received three straight one ratings, while concert orchestra left with an overall two. With this being Mr. Phalp’s last year before retirement, symphonic and concert orchestra’s performances at large group state will, most likely, be the last time Phalp will conduct in front of a judge.

“It was an amazing experience, since this was my first year in the highest band and I think it went great!” Pirani said. “I wasn’t nervous; however, I definitely had fun playing the pieces.”

KSHSAA has designated BVN as the host for a portion of the schools participating in state contest; hence, seniors and juniors were given an opportunity to volunteer to guide other schools, take music, and introduce the choirs to the judges. BVN’s Mustang voices presented three choirs: chorale, JV chorale and mixed concert choir.

“Helping host Large Group Contest was a really rewarding experience because I was a student helper in the PAC [so] I got to listen to choirs from other schools for a majority of the day,” Lewis said. “It was extremely interesting watching how other choirs behave, perform, prepare and act while in a professional setting, along with hearing great music. It was also fun getting to hear pieces that I have sung before at BVN or songs that I want to do at BVN next year! It was really fun getting to witness other schools creating great music.”

Though chorale prepared four pieces, their contest leaves the repertoire undecided until mere seconds before their performance, for the judges select two of the four pieces while the choral director picks one from the remaining half. The selection included “Lux Nova” by Eric Whitacre, “Ballade to the Moon” by Daniel Elder and “Muie Rendera” by Pinto Fonseca.

“Competing at large group contest was a blast!” Lewis said. “There was so much nervous and excited energy throughout the morning but it was totally worth it! Chorale had worked so hard on our pieces and we were so ready to compete with them along with showing peers from other schools. It was different from last year because it was the first time I was competing in a group where the judges pick only three out of our four songs, which was extremely nerve wracking, but I was ready for the challenge. Overall, I absolutely loved performing beside my best friends!”

The remaining choirs’ pieces were picked with certainty beforehand. JV chorale’s music included “I Am Not Yours” by David N. Childs and “Jordan’s Angels” by Rollo Dilworth. Finally, both the boys and girls concert choir performed two combined pieces: “When I Think of You” by Laura Farnell and “The Terrible Tale of Tom Gilligan” by John Rutter.

Years of work and dedication from every individual in the music program has allowed BVN to excel, including accompanists and teachers. From those experienced with private lessons and those dedicated without extra training, everyone was able to share their work on a grand scale. From waving goodbye to seniors and beloved teachers, state can be more than just a contest.

Words from Dr. Julie Yu, co-director of choral studies at Kansas State University, were repeated by Sickel to chorale before taking the stage, “sing to inspire, not to impress,” he said because music doesn’t just reside within a four point scale.

“My favorite thing about competing with choir is putting hard work into music and then showing it to a professional,” Lewis said. “It was awesome getting to hear their opinions and feedback. My other favorite part is how all the choirs really become a family because we put months of work into difficult music and . . .  get it performance ready. I’m so excited to compete once more next year!”