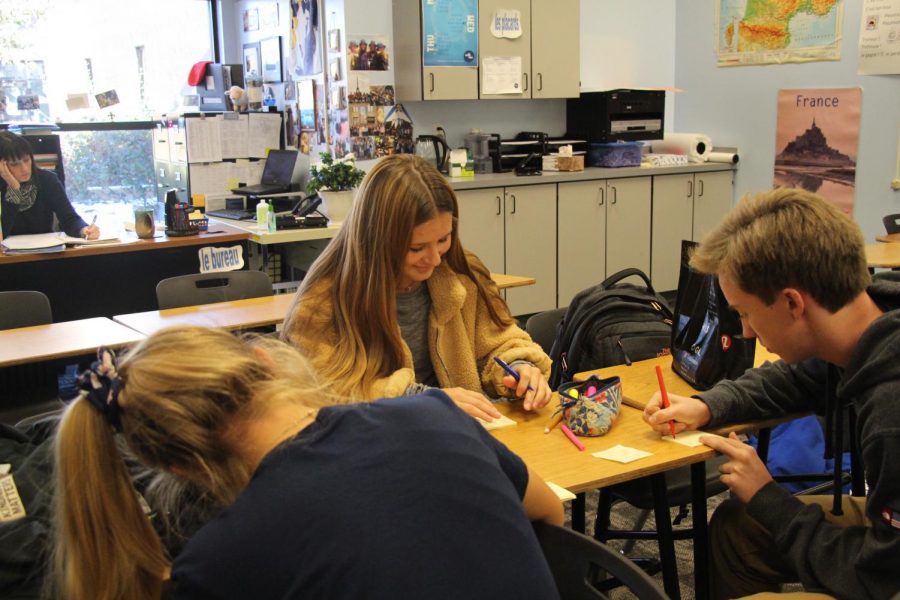 The Impact of Words (IOW) club is a brand new club at Blue Valley North intended to take back the tension and stress that stagnates among students. This club was started by senior Jackson Donaldson, who resonates with feeling the negative atmosphere at the school.

“The purpose of starting the club is to spread kind messages to people,“ Donaldson said. “…School [feels like] a place of stress and so when I walk through the doors I immediately want to walk out.”

Donaldson knew others who felt the same as he did about Blue Valley North and gathered a group he knew who would want to brighten other peoples day with random acts of kindness. Every Wednesday the club meets in Madame Johnson’s room and collaborates ideas to write on sticky notes which are given to students or staff members.

Junior Declan Carter is a member of IOW and actively works with Donaldson to come up with new ideas for the club.

“The club brainstorming for specific messages [on sticky notes] is such a positive environment,” Carter said. “… The idea of the club is to strengthen the North Community… we can really make a difference through our words.”

IOW club is open to anyone and everyone in the school. French teacher Madame Johnson is the sponsor for the IOW club. Johnson believes that this club can influence Blue Valley North positively.

“…One of the things that North has been lacking in my opinion… is that community and family feel,” Johnson said. “I liked the idea of something bringing us together as a mustang family.”

During meetings everyone sits down and gives ideas for what to write on the post-it notes. These post-its have various messages that are encouraging “let’s get this bread” or more heartfelt messages such as “you are loved.” This takes a short amount of time, since meetings last thirty minutes at most. After everyone is finished writing messages, everyone quickly puts the notes on lockers or the staff member they’re intended for. All post-its are left anonymous but are signed as the Impact of Words club.

Overall, the point of this club is in this title. The goal of this group is to positively impact the mustang community with simple words. Everyone, whether it’s a staff member or a student, goes through struggles. The members of this club attempt bringing a little bit of joy to Blue Valley North, even if it’s just a random act of kindness.

If you would like to join The Impact of Words club, meetings are held in Madame Johnson’s room every Wednesday.