Revving Up With Robots 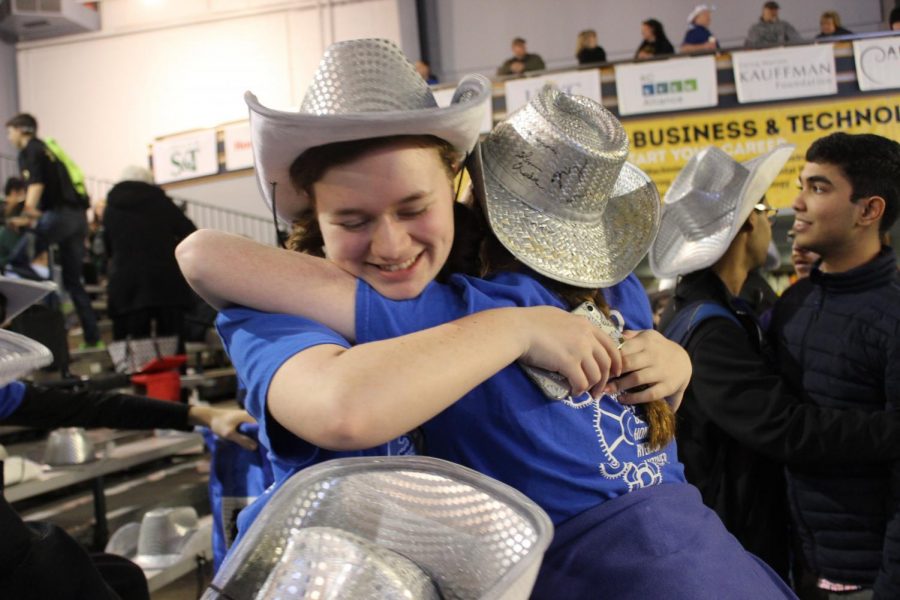 Students at BVN have taken math and science classes, but several students further their STEM education and apply the skills they learn in class building robots for several hours a week at Blue Valley CAPS.

Senior Sajni Saravanan first got involved with robotics her freshman year when she followed a friend to a meeting. She now works primarily on public relations and the electrical side of the robot. Currently, during off-season, she spends around six hours a week on the FIRST Robotics Competition (FRC) team. However, during the team’s busy season in January and early February, she’ll spend more than 20 hours a week.

“I definitely fell in love with the people first, rather than the robots,” Saravanan said. “I love the people there. They’re really accepting, and it’s kind of an atmosphere that you’re welcome no matter who you are or what you like. And as I learnt more about the robots and the process and getting practice innovating creative solutions to these problems, I kind of fell in love with that too.”

The team, Metal Mustangs 2410, started out at BVN, but as the team grew bigger, it moved to Blue Valley CAPS and now includes around 40 members from all five of the Blue Valley high schools. However, it retains its original name in reference to the BVN mascot.

Despite the fact that each individual school doesn’t have its own team, Saravanan says that there is no lack of team spirit at competitions.

“We do a lot of dancing,” she said. “We have our team hats that light up and shine…We do all the sports chants. It’s like you’re at a football game, but instead of cheering on teams, you’re cheering on your drivers and robot…It’s basically sports for nerds, and it’s just as loud, if not louder compared to a football game.”

Freshman Niki Singh is part of FTC, and she appreciates how robotics has allowed her to meet people from a variety of geographic locations, especially when she attended the international competition in Houston last year.

Senior Ethan Tucker is part of FRC, and his goals for this season are to build up the team dynamic after the departure of last year’s seniors and learn more about the activity.

“We try not to set [goals] that are all about being competitive and try to set goals like learning and working as a team,” he said.

One of the team’s other goals this season is to attract more underclassman members, especially female members.

“We have a really strong, really talented senior class, but after we’re gone, I just want the team to be just as good as it’s ever been,” Saravanan said. “All the girls right now, except for two, are seniors, so what I really want to happen is for more underclassman girls come on.”

Saravanan says that there are currently 12 girls on the 52 member FRC team, making up 23 percent of the team. According to the Economics and Statistics Administration, women made up 24 percent of the STEM workforce in 2015.

Tucker acknowledges that there is a learning curve to joining the activity, but he encourages those who are interested to not be afraid to try it out.

“It’s pretty hard to come in and be the one who’s designing the majority of the bot, but it’s pretty easy to show up and be able to help in something. You just have to take initiative,” Tucker said.

Although there are some challenges to starting out, Saravanan believes that her experience in robotics will help her in her future career.

“Before robotics, I was the quietest kid on the block. I would be so shy. I didn’t really have any technical skills. Even now, I’m still improving,” Saravanan said. “I’m not the best technical person on the team, but I definitely have my communication skills and presentation skills. Just organizing and responsibility, robotics has helped me so much.”