Families and friends reconnect during quarantine 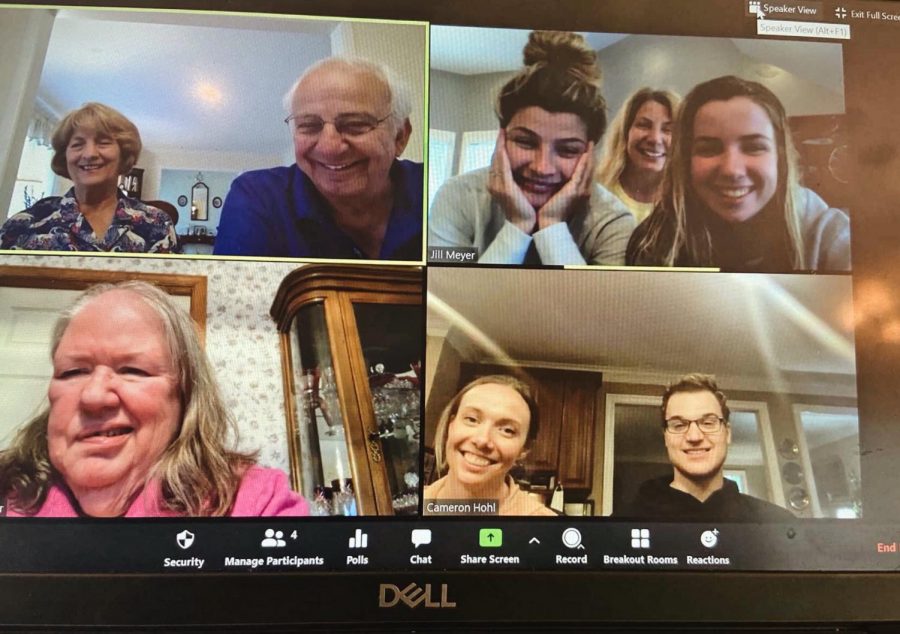 Junior Mackenzie Meyer participates in a Chopped competition with her extended family over a Zoom call.

During the current period of isolation and social distancing, COVID-19 has prompted some people to grow closer and reconnect with friends and family. During a March 2020 survey by Statistica, 76 percent of responding adults stated that, due to the COVID-19 outbreak, they had used email or messaging services to communicate with others.

Many people are taking the time cooped up in their houses to reconnect with family members and friends online and over social media platforms. According to MarketWatch, Zoom calls, Skypes and similar platforms have skyrocketed during the quarantine. As of March 22, Zoom’s daily active user count was up 378 percent from the previous year, while monthly active users was up by 186 percent, according to data from Apptopia. Junior Mackenzie Meyer has reconnected with her extended family – ranging from Pennsylvania, Virginia, and Maryland- over weekly Zoom calls.

“I think the calls are really fun because I don’t normally text them otherwise, so I get to see what everybody’s doing and it’s a good way to pass the time,” Meyer said. “I miss all of them, and it’s also just a good way to catch up.”

The idea of starting a large Zoom call traces back to Meyer’s grandfather who wanted to see and talk to the whole family at the same time. Meyer’s mother set the idea in motion by setting up the call and everyone was able to join.

“For Easter, my grandpa made a competition among my entire extended family,” Meyer said. “Everybody could decorate an Easter egg however they wanted, and the winner would receive a $50 Amazon gift card. On the day before Easter, we all went on the Zoom call and voted on who should win.”

According to the Wall Street Journal, many people are finding new friendships and reconnecting with people on the outside of their circle, like former classmates, that they previously called once every other month. Broadcast teacher Charlie Huette reconnected with his brother over the quarantine. Living on the West Coast, the regulations are different, but the two have reconnected over online platforms.

“We first reconnected a few weeks ago, in the early days of the COVID spread in the US,” Huette said. “He lives in Los Angeles, so he was under much more strict stay-at-home orders than I was. Out of the blue — at like 2 in the morning — he just sent me a text saying that he’d like to reconnect and that he regrets that we had fallen out of touch. He sent a bunch of pictures of his family, too.”

While technology has been a major tool for reconnecting, many people have found other ways to reconnect with loved ones. Writing letters has become a trend among teenagers and their friends to stay connected or reconnect with people they haven’t spoken to in a while, according to the Wall Street Journal. Junior Sofia Lamento saw the trend on a friend’s Snapchat story and immediately began working on writing her own letters to mail out while stuck in the house.

“I wrote to 24 people in total,” Lamento said. “Many of them were friends, but some of them were people I used to talk to and people I want to get to know. Each letter had a special message and/or different topic and each of them had drawings with inside jokes or pretty shapes. I chose the design based on whatever best fit the person.”

According to Lamento, writing letters has proven to be a more meaningful way to communicate and reconnect with people. This “old-school” form of communication, not revolving around technology, is a great way to get closer with someone or rekindle a friendship that has become distant over the years, according to Lamento.

“I would 100% recommend writing letters to your friends,” Lamento said. “Not only is it a safe way of communication, but it is a great activity with a fun result. Everyone ends up happy and it feels like I accomplished something that they will cherish forever.”