With the spring musical inching closer, students discuss their opinions and experiences regarding the show. 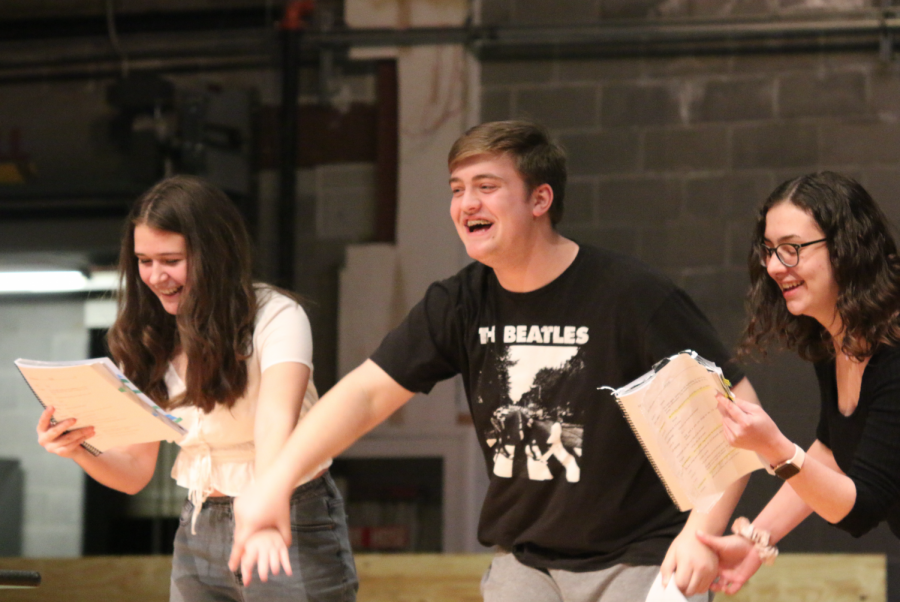 Nearing its premier on Feb. 6, the Blue Valley North spring musical, Honk!, depicts a poultry tale based on the childhood story of the Ugly Duckling. Directed by Kristy Thomas, Honk! highlights how every individual possess beauty in unique ways, and teaches students, “that being different is not a bad thing to be,” according to Music Theatre International. This isn’t the first time students have seen Honk! before. Many of the high school thespians have previous experience performing Honk! at Leawood Middle School.
“It’s interesting because it is made for a middle school cast,” junior Casey Whitworth said. “But it’s cool to understand aspects about the musical that I never realized as a middle schooler at LMS.”
Whitworth plays the role of Dot, a supporting character who appears in the ensemble and performs multiple solos. Stemming back to elementary school, when she first began performing in musicals, Whitworth has always felt passionate about singing, acting and the overall musical atmosphere. With the first show inching closer, she feels as if the cast is nearing performance ready, but still needing to perfect certain parts for preparation.
“I think we have learned all of the parts of the musical and all of the songs,” Whitworth said. “But now we are doing the acting part of it, and we need to tie everything together.”
From painting the sets to controlling sound effects, the crew works to make the visuals and composition of the show appealing for the enjoyment of the audience.
“Ever since we got back, during [the] second semester, we have started building the flats and individual pieces,” junior cast member Cade Freiermuth said. “We have actually started painting the set and the show is coming together within the last few weeks.”
Aside from the last minute details, the crew has been working on Honk! Since October, along with adjusting to the various differences that come with a new director.
“It’s cool because we started practicing early, like way earlier than we ever have before,” Whitworth said. “We started out really slow to learn everything and to put everything together, so it’s interesting to see how time has warped the show.”
With Blue Valley North hiring a new head of the theatre department, Kristy Thomas, various customs of the musical have shifted, and with a different light being shed.
“This year’s show is very different than Jekyll and Hyde,” Freiermuth said. “This show is obviously very light and happy because it’s about the Ugly Duckling.”
The cast has also been adjusting to the fact that they are starting to block towards the end of the process. Blocks are directions given to the actors indicating stage placement throughout different scenes of the show. In addition to this, the set crew claims that they are focusing more on painting and building the set instead of moving the pieces around.
“For this show, we had to make and paint a ton of platforms,” junior Sarah Vrana said. “For most of the set, we built pieces that could be wheeled on and off the stage for convenience.”
Although not initially wanting to be apart of this musical, Freiermuth is glad that he has gotten involved with theatre during his time at BVN.
“This year I wasn’t really feeling the musical but I still obviously wanted to be involved, so I joined set crew,” Freiermuth said. “I have learned a lot of real life skills in terms of handiwork and it kind of puts everything into perspective. There are so many other parts to this than just being an actor.”